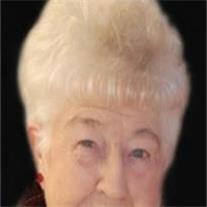 Donna May Benson Thompson Beckstead, 91, passed away peacefully Saturday, January 12, 2013 at her home with her family around her. She was born in Fairview, Franklin, Idaho on March 19, 1921 and lived in Idaho until 1957 when she moved to Mesa, AZ. She lived a life of service to her family and church. She is survived by her five children Julie (Gary) McDowell, Randi Baker, Marie (Grant) Coley, Jerry (Diana) Thompson, Brent (Marlene) Thompson, 19 grandchildren, 46 great-grandchildren, and 1 great-great grandchild. Her favorite activities were bowling, gardening, sewing, and the Phoenix Suns. She was preceded in death by her childhood sweetheart Blaine Thompson and the late Ace Beckstead, her father Morgan Benson, mother Myrtle Benson, two brothers Lee & Seth, grandson Blaine and granddaughters Michelle & Amber. Visitation will be January 18, 2013 from 6 to 8 pm at Bunker’s Garden Chapel, 33 N. Centennial Way in Mesa. There will be a viewing January 19, 2013 at the LDS Chapel at 613 N. Stewart in Mesa from 10 to 10:45am followed by a memorial service at 11. Interment will be at the Mesa Cemetery in Mesa, AZ.