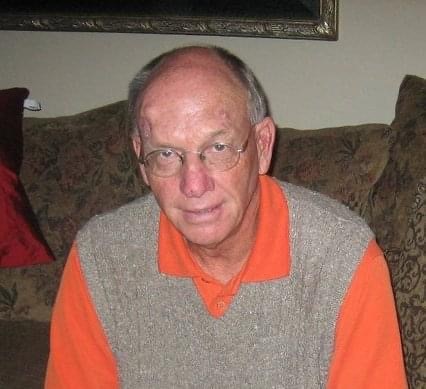 Donald William Hogue “Blade” passed away peacefully on January 1, 2023 in Mesa, Arizona. He was 82 years old. He was a second generation native, born in Globe, Arizona in 1940 to Thelma Cromer-Hogue and William A. Hogue. He is survived by his four children Christine Lal (Ryan), Heather Park (Brandon) , Ryan Hogue (Shalise), and Stacey Hogue-Robbins (George), as well as five grandchildren.

Don was known to be extremely introverted unless you were talking about any of his favorite subjects or pastimes including basketball, golf, hunting, fishing, camping, hiking, Arizona scenery, Globe mexican food, poker, dogs, especially his dog Bo, oldies 50’s music, golf, and more golf. He was also known to be a numbers guy, extremely analytical, neat, orderly, and routine in everything he did.

Don was born in Globe, Arizona in his home in March of 1940. His Mother Thelma, Grandmother Pearl, and Aunt Zola were some of his favorite people as a young child. All three ladies had a great influence raising him. Most days you could find little Donnie snacking from his two pomegranate trees in his yard or playing in the big ditch behind his house for hours. He loved to dress up as a cowboy and play with his good friend Virgil. His first cousin Elaine is only a few years older and was like a sister to “Donnie”. He loved Elaine with his whole heart. His childhood included many fond memories of Elaine Davis, his Mom, Antz, and Grams.

When Don was 8 years old his Mother married David T. Polk and Don always considered him his Father. They had a loving relationship. Don was grateful to learn about the great outdoors from Dave. Dave taught Don about camping, fishing, and hunting. Don’s parents, Dave and Thelma, would take Don to Greer, Arizona several times through the years and that tradition lives on today. Greer is a favorite spot for his children to visit and holds a lot of special meaning to our family.

Basketball was a lifetime passion for Don. One of Don’s favorite life accomplishments is winning the basketball state champ in high school. Don loved basketball with all his heart and it showed. Number 8, Don Hogue, Guard, for Globe High. Many of his classmates called him the star of the show. He was a member of the heralded “Senior Six”, and coached by the great Kenny Trout. The Tigers had a winning basketball season in 1958, 14-5. Don enjoyed telling the play by play as fast-break on Offense, and Full-Court-Press on Defense for the Tigers, and Don Hogue, on the court, was quite exceptional. With Don’s great play, the Tigers won the State Basketball Championship in 1957. Go Tigers! Don continued his playing competitive basketball; he spent a short time playing for Eastern Arizona College in Thatcher, then off to play for NAU in Flagstaff. Also played for the Navy in Hawaii and he even played for Motorola for fun many years later. Don was inducted into the GHS Hall of Fame in 2015.

His best friend Norval Tyler was by his side starting from age five and beyond. Norval used to say to Don “you’re the jock and I’m the brains.” The two went on after high school and always remained best friends. They worked together, played together, had families at the same time, and enjoyed each other’s friendship. Don was heartbroken when his best friend passed away in 1996. These two peas in a pod are joking and chatting it up in heaven, guaranteed.

Don worked in Real Estate most of his life. We love hearing the stories about his other jobs, particularly the summer he had his first job digging fence post holes with his friend Virgil for .50 cents a hole. He even drove a Coca-Cola truck in Flagstaff for a short time. He also held various positions with the Copper Mines in Globe-Miami area. He worked for Rogers Corporation and also Motorola.

Motorola was quite possibly a “meant to be” career as it’s where he met the love of his life, Rosemary Hogue, or “legs” as he affectionally called her. They had three children together and despite their ups and downs, their love story lasted a lifetime. Unfortunately Don was preceded in death by Rosemary in 2013 when she passed away, unexpectedly. Reunited in heaven, they are once again able to see each other after a decade apart. Greeted by Rosemary with open arms, a hug, and possibly an ice cold beer. We can envision them dancing and laughing together once again.

One of Don’s favorite things to do was road trips. His last few years that he was still able to drive included countless road trips to Globe, through the Salt River Canyon, to Show Low, then back home to Mesa. He shared with us his tradition on those road trips. During these trips, when he came upon a large canyon he would roll down his window and yell out names and listen to them echo. His favorite dog Bo and Rosie were two names he would yell out often. He also yelled Norval and his mother’s name as well.

Well Dad, we hope so much that you are at rest but your spirit is still taking that endless beautiful road trip to paradise and meeting up with those that names that echoed many times. Don had a huge love for his home state of Arizona. I think his road trips were very personal to him and it’s where his heart felt at home. It brings comfort knowing they were some of his favorite moments. We will always think of you when we stop for a burro in Globe, when we drive through the Salt River Canyon, shoot a basket, swing a club, hike a mountain, make bacon and eggs, see a cute white poodle just like Bo Bo, or enjoy a family trip to Greer. Your memory will be a blessing and we love you forever.