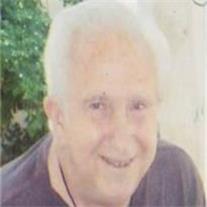 Donald L Sigler, 75. Earth has given Heaven another angel. Loving husband, father, grandfather and great-grandfather, Don passed on to a new life surrounded by his wife of 55 years, Beverly and his daughters, Dawn and Davida. He was preceded in death by his son Eric and his grandson Matthew. He was born in St Francisville, MO on April 20, 1936. Don retired from Honeywell after many years as a Machinist. He served his country in the Air Force from 1958-1962. He is survived by his wife, Beverly, daughters, Dawn & Davida, grandchildren, Mikel, Kerry, Ricky, Justin, Kyle and Brittany, great-grandchildren Ezra, Brodi, Caden, Kendal & Lexi. Visitation is Wednesday, 2/15/12 from 6-8 pm at Bunker’s Garden Chapel, 33 N. Centennial Way in Mesa. Graveside services will be Thursday, 2/16/12 from 12:30 – 1 pm at National Memorial Cemetery, 23029 N. Cave Creek Rd, Phoenix AZ.