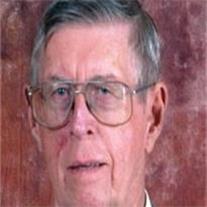 Donald Lee Hartmann passed away quietly Wednesday November 20th 2013 at the age of 80. Don was born on May 24, 1933 in Michigan City, IN and earned a B.S. in Civil Engineering from TRINE University formally known as Tri-State College in Angola, Indiana. He married the late Beverly Ann Gring who preceded Donald in Heaven on February 20, 2012. Donald and Beverly were married on June 19, 1954 before Don joined the United States Army in 1957 as a Personnel Specialist. Don and Beverly spent 57 glorious years together in Indiana, Illinois, Virginia, and Wisconsin, before retiring to Mesa, AZ in 2000. Donald is preceded in death by his daughter Angela, his parents Marie and Roy, step-mother Charlotte, and his cherished dog Ollie. He is survived by his sister Jeannette, step-brother Robert, children Sandra, Brenda, Douglas and Stephen; 7 grandchildren; Megan, Chad, Evan, Andrew, Hannah, Amanda, & Sara; 1 great grandchild Luke; two beloved pets Jasper and Echo; and many special friends. Donald treasured the LDS Church where he served in many capacities including service as a Temple Worker. Donald will be remembered by his loved ones and dear friends as a very service minded man, devoting time to family, the U.S. Government, The Lions Club International Foundation, and the LDS Church. Visitation will be Sunday November 24th from 5–7 PM at Bunker’s Garden Chapel, 33 N. Centennial Way, Mesa, AZ 85201. A viewing will be held Monday, November 25 at 9AM prior to the 10AM service at the LDS Aspen Ward, 1249 South 48th Street Mesa, AZ 85206. Interment to follow at the Mesa City Cemetery. In lieu of flower’s the family requests that donations in Donald’s name be made to the Lions Club International Foundation; http://www.lcif.org/EN/index.php, 300 W. 22nd St. Oak Brook, IL 60523-8842; specifically the White Cane Program.