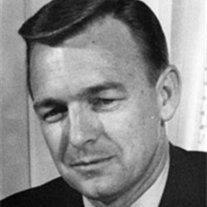 D. Delos Ellsworth, a former state legislator who also served a stint in Washington, D.C., as U.S. Sen. Barry Goldwater’s top aide, died Monday in Mesa, according to his son, Mesa attorney Brent Ellsworth. He was 82.
Ellsworth, a Mesa Republican, served two terms in the Arizona House of Representatives from 1965 to 1969, including two years as House majority whip, and two terms in the Arizona Senate from 1971 to 1975. He also was elected Maricopa County Republican Party chairman and, The Arizona Republic reported in 1968, “headed the county’s party machinery during the pre-election build-up which resulted in a historical sweep of all the Maricopa County offices, long the stronghold of Democrats.”
He stepped down from the county GOP post in November 1968 to become Goldwater’s administrative assistant, the position that today is known as chief of staff.
“Delos was a good worker,” said Judy Eisenhower, another longtime aide to Goldwater who also had a tenure as the senator’s administrative assistant. “He’s not like they are today: You ask a question and he’s going to find you an answer.”
Goldwater, R-Ariz., had won a third U.S. Senate term in 1968. Goldwater previously had served two Senate terms from 1953 to 1965, but did not seek re-election to the Senate in 1964, the year he was the GOP’s unsuccessful presidential nominee. Goldwater sat out the next four years and ran again when veteran U.S. Sen. Carl Hayden, D-Ariz., decided to retire.
“Dad had worked on Goldwater’s presidential campaign,” Brent Ellsworth said. “So they knew each other, but it’s not like they were best buddies. But Goldwater asked him if he would come back and be his administrative assistant. He was the head guy who ran the office and everything.”
Goldwater told Ellsworth that he didn’t want him to get “Potomac fever,” the son said. Goldwater instead encouraged Ellsworth to stay in Washington for a couple of years and use the experience “as a springboard to other things” back in Arizona.
“My dad loved it back there — he loved the whole political scene and climate,” Brent Ellsworth said. “He and Senator Goldwater got along great.”
After returning to Arizona, Ellsworth was elected to the state Senate, where he served with then-Senate Majority Leader Sandra Day O’Connor, who later become a U.S. Supreme Court justice. He was talked about as a possible Republican gubernatorial candidate in 1974, but opted to exit politics for a teaching career at Brigham Young University in Provo, Utah.
He was director of BYU’s Ezra Taft Benson Agriculture and Food Institute for several years starting in 1978.
Ellsworth is survived by his wife, Alba, six children, 36 grandchildren and 37 great-grandchildren. Visitation is Friday, December 27, 2013 from 6-8 PM at Bunker’s Garden Chapel, 33 N. Centennial Way, Mesa, 85201. Funeral services are Saturday, December 28, 2013 at 10:30 AM, preceded by a visitation at 9:30 AM at the LDS Kimball East Stake Center, 4640 E. Holmes Ave., Mesa, 85206.