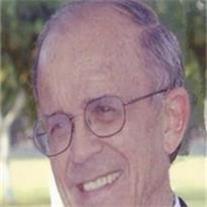 Galbasini Donald Charles, 81 years old of Mesa, Arizona died March 16th, 2012. He was born May 31st, 1930 in Fort Lupton, Colorado to Harry and Opal Galbasini. He married Joan Olsen on April 4th, 1964. He was preceeded in death by a brother Gene and a son Ryan. He will be missed by his family, Joan wife of almost 48 years, his children; Jill (Don Dresser) of Philadelphia; Craig (Jaye Lynn), Ryan (deceased) Kevin (Jackie); Chad (Kate) and his delightful grandchildren Erika, Ashlyn, Ella, Gisele, Sienna, Taylor, Austin, Caden, Mackay, Harrison, and Carlee. He served in the Korean War. He graduated from the University of Colorado in 1955 and the Santa Clara Law School in 1971 and has worked as a tax attorney since. Visitation will be held from 6-8 PM on Monday March 19 at Bunker’s Garden Chapel, 33 N. Centennial Way, Mesa, AZ 85201. Funeral services will be Tuesday March 20th at 10 AM, with visitation from 9 to 945 at the Church of Jesus Christ of Latter-day Saints at 2618 N. Lindsay Rd Mesa, AZ. Donations may be made to the Perpetual Education Fund in care of John Fletcher, 2126 N. Chestnut Circle, Mesa, AZ 85213