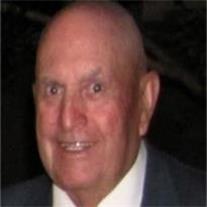 Don L. Turley, 81 of Mesa, passed away peacefully on January 5, 2013 after a courageous two year battle with cancer. He was born March 31, 1931 in Snowflake, AZ to Harvey and Melba Turley. After grade school in Snowflake he attended high school in Iowa where his family moved, excelling in sports and student council. He served an LDS Mission in the New England states from 1951-53, and then in the Army from ’53-55. Following his military service he attended Arizona State University receiving a BS in Agronomy. This led to employment for the U of A Experimental farm in Mesa and later the ASU Cotton Center, researching pesticides. While at ASU in 1959, he met and married Martha Ann Bartson in the Mesa Temple. They settled in Mesa raising four boys and five girls. Martha preceded Don in death, passing in 1988. He is survived by all nine of his children; Guy (Alison), Greg (Bobbie Jo), Gay, Glenae, Genie (Billy), Gary (Beth), Gennifer (Creston), Genice (Zack), Geoff (Karen), and 28 grandchildren. To support his large family Don left agricultural research and worked in the construction industry for more than twenty years before finding his last career driving a bus for Mesa Public Schools. He loved to work and would often outpace men half his age. Visitation is Friday, January 11 from 6-8 PM at Bunker’s Garden Chapel, 33 N Centennial Way. Services will be held Saturday January 12 at the Old 2nd Ward LDS Chapel, 15 W 1st Ave in Mesa. Visitation from 10-10:45 with services starting at 11. Interment will be at the Mesa City Cemetery.