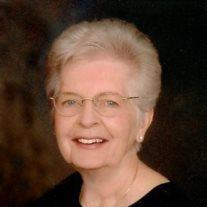 Dolores I. “Dolly” Dumont Brouillard, 80, passed away peacefully on March 7, 2014, in Mesa, Arizona. Dolly was born on July 3, 1933 the eighth of nine children born to Samuel and Aldea Robidoux Dumont of Oxford, Massachusetts.

In 1953, Dolly married Joseph L. “Mike” Brouillard, and they began their life together in Southbridge, Massachusetts. Devout Catholics, they raised four children, and attended Sacred Heart Catholic Church, then Notre Dame Catholic Church. Dolly studied religious education and taught 2nd grade at the school. She loved children, and after moving to Arizona in 1971, she continued to teach at the elementary school in Ajo. Another move to Chandler prompted Dolly to continue teaching, work at the family 7-Eleven which used to be on the corner of Ray and Alma School Roads, and eventually work at the Cub House at Basha’s Grocery store.

Dolly had many interests. She loved her family, especially the grandchildren and great grandchildren; enjoyed musicals, ceramics, redecorating her house, and most of all, shopping. She attended both St. Mary’s Catholic Church and St. Andrew’s Catholic Church in Chandler. And she loved to talk – to anyone, anywhere, anytime.

After Joe passed away in 2009, she moved to Discovery Point in Mesa. She enjoyed decorating the chapel, participating in their community entertainment, and shopping trips.