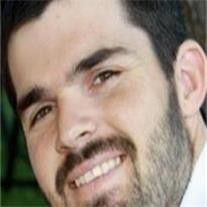 Derek Allen Beach was born February 29, 1984 in Mesa, Arizona to Roland and Carla Beach. Derek grew up in a busy and eventful household filled with 9 children. Being the second youngest didn’t stop Derek from forging his large personality and ability to make his presence known as soon as he walked into the room. Two weeks after marrying his wife Kaela, Derek was diagnosed with stage four Hodgkin’s Lymphoma. In July 2009, Derek’s son Camden was born while he endured chemotherapy and a transplant. After many more chemotherapies, radiation treatments, and two bone marrow transplants, Derek always kept a positive attitude and smile on his face and found immense joy in being at home with his family. Derek passed away from complication of his treatments on May 1, 2013 and is survived by his wife Kaela, his son Camden, his parents, and 8 siblings. Derek’s viewing is Friday, May 10th from 6-8 PM at Bunker’s Garden Chapel, 33 N Centennial Way in Mesa. His funeral is Saturday, May 11 at 10 AM at the LDS Chapel, 1111 E Knox Rd in Tempe.