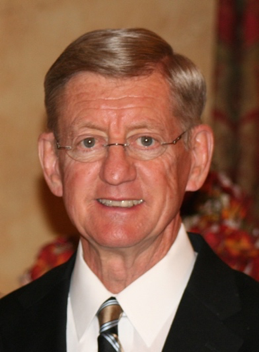 Dean Condie Jensen passed away June 3, 2018 at the Banner Heart Hospital in Mesa, Arizona, at the age of 71, with his wife and children by his side. Born in Boise, ID, Dean was the third son of Weldon Tolman Jensen and Roma Condie. He graduated from Rancho High School in Las Vegas, Nevada, and served in the Northern Indian LDS mission based in Rapid City, South Dakota.

Dean married Margaret Jean Hoopes, of Thatcher, Arizona, in the LDS Mesa Temple in 1967. They are the parents of seven children – all raised in Mesa and all married: Aliesa (Craig), Greg (Tracy), Steven (Sally), Spencer (Alison), Sterling (Lindsay), Scott (Liza) and Burkley (Jenni).

Dean received a bachelor’s degree in business administration from the University of Nevada Las Vegas. As a general contractor in Arizona, Dean built residential homes in the 1970s, commercial buildings in the 1980s, a chain of 50s diners in the 1990s, and two Mexican restaurants in the early 2000s. Dean built all four of the permanent homes in which he and Jean raised their family: one in Las Vegas and three in Mesa.

Dean and Jean have centered their entire lives around family values and Christian service. Dean served as a bishop, mission president and in many other callings in the LDS Church. They have been blessed to acquire many friends in Arizona and around the world from their travels and missions. In 1988 Dean and Jean and their children were called by the LDS Church to serve for one year as work volunteers at the church-owned historical site of Adam-ondi-Ahman, in Missouri, where Dean’s assignments included the tree nursery. In 1991 Dean volunteered with the LDS Benson Institute, living with the family in Oaxaca, Mexico where the four youngest children attended Spanish-speaking schools for a year while Dean and Jean taught English. From 2003 to 2007 Dean and Jean served in the Indonesia Jakarta LDS mission – first as full-time missionaries and then as mission president. In the intervening nine years they have kept in close contact both with the hundreds of missionaries they trained and with whom they served, as well as with many of their Indonesian friends. For the past nine years, from 2009 through 2017, Dean served as a counselor in the Mesa Salt River LDS stake presidency. At the time of Dean’s passing he and Jean were preparing to serve another LDS mission, in Chile.

For nearly five decades Dean and Jean have been pillars in the East Valley community. Dean participated in local business and civic organizations, political campaigns and served for decades in many capacities in the Boy Scouts of America, earning its prestigious Silver Beaver award. His lifetime of selfless service included countless hours of doing manual labor, odd jobs and projects for his married children, and spending personal one-on-one time with his 28 grandchildren and one great-grandchild (born in 2018).

Dean lived life to the fullest with many interests and hobbies including participation in high school and college wrestling, Native American adoption programs, piloting planes, gardening, hiking, mountain biking, boating, skiing, birding, making pizzas, and building things – many things – from pinewood derby cars to campsite “furniture” to replicas of religious artifacts. The crown jewel of Dean’s craftsmanship was the family cabin he recently built (nearly single-handedly) on the Mogollon Rim, finishing it mere weeks before he passed away.

Besides his wife Jean and their seven married children, Dean is also survived by brothers Tom and Jon, and sisters Sally, Nancy and Kathy. He will be missed by his family and friends and the many lives he touched.

A viewing for family and friends will be held Friday, June 8, 2018 from 6-8 p.m. at the Bunker University Chapel, 3529 E. University Dr. in Mesa. Funeral services will be held on Saturday, June 9 at 1:00 p.m., at the Mesa Arizona Salt River Stake Center, 6942 E. Brown Rd., Mesa. A brief graveside service will be held immediately following the funeral. Interment will be at the Mesa Cemetery, 1212 N. Center Street. Condolences may be sent to www.bunkerfuneral.com .