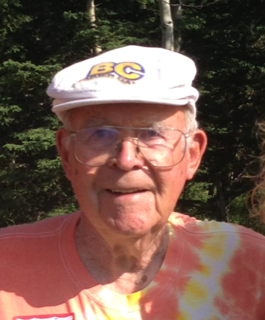 David grew up in Oil City, PA where he and his two older brothers, Robert and Bert excelled in Boy Scouts, Academics and the fine art of Practical Jokes. This “trio of trouble” remained extremely close throughout adulthood and were together as recently as September to celebrate David’s 90th birthday.

David was able to skip his last year of high school, opting to head straight to Allegheny College. He served as a member of the 82nd Airborne for two years and upon discharge, enrolled in The University of Texas at Austin. He was a member of the Delta Tau Delta Fraternity and played in the woodwind section in the UT Longhorn Marching Band. While attending UT-Austin he would hitchhike back and forth between home in Pennsylvania and Austin. He graduated from UT-Austin in 1951 with a Bachelors of Science degree in Petroleum Engineering.

After graduation he found work as a rough neck in the oil fields of West Texas and Oklahoma. He worked for a short time in Bogota, Colombia. While in Columbia he purchased several emerald stones, one of which was later used for a very special purpose.

After returning from Colombia, he landed a job with Carter Oil Co. in Tulsa, Oklahoma. It was in Tulsa that he met his beloved wife Polly and after a short courtship, asked for her hand in marriage, using a ring he designed with an emerald from Columbia. In June 1954 Dave and Polly wed in Tulsa. The first three of their five children were born in Tulsa; Sam, Ed and Julia.

In 1960 Dave received a job offer with Imperial Oil and he move his family to Calgary, Alberta, Canada. After moving to Calgary Dave and Polly had two more children: Dan and Mary. Dave’s work with Imperial Oil included advances in research and technology of enhanced oil recovery.  As hard as Dave worked, he did enjoy family vacations. Each summer Dave, Polly and the five kids would load up into the International Travelall with travel trailer in tow and boat on top they explored Western Canada and the U.S.  Dave was well known for long days and a heavy foot. There is nary a historical Point of Interest sign in the region that has not been read by Dave Bossler. It was during these summer vacations that the family learned of ; The Power of the Hoo-Doo; The Dark and Stormy Night; Rock-on-Road; Rubby-Dub, who Waskesiu, and the important life lesson; “Daddy’s know everything and Mommy’s are always right.”

Dave and Polly remained in Calgary until 1983 when Dave, after retiring from Imperial Oil, was offered a job with Sirte Oil Company in Libya where he and Polly lived until 1986. Upon returning to Canada they purchased several hundred acres in south-central British Columbia where the 1994 Bossler Reunion was held. Over the next two decades they moved around living in places of extreme beauty in Western Canada and the U.S. before settling in Yuma, Arizona.

Dave had many passionate pursuits including fly-fishing, hunting, woodworking, lapidary and FOOTBALL!  He was an avid rock-hound and enjoyed any project involving geology. Dave was always on the move and enjoyed traveling extensively. He never missed a chance to see a new place. Dave and Polly took many vacations together all around the world, visited countless countries saw many beautiful places.  Polly preceded Dave in death, on October 12, 2008.  Although travelling without Polly was not as enjoyable, Dave continued with his get up and go spirit, even embarking on a cruise from San Diego, California, through the Panama Canal and landing in Florida.

A private family memorial service will be held at a later date.

Or any charity of your choice.