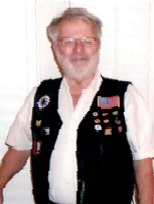 David E. Johnson was born in Hastings, Nebraska on September 17, 1947 and passed from this life on December 9, 2018 after a lingering illness due to the effects of Agent Orange. David graduated from St. Cecelia High School in 1965. He attended Milford Technical College and obtained his license as an electrician. David was member of the 295th Ordinance and his entire company was called up and sent to Vietnam in 1968.

David had an interesting life and was always ready for new challenges. He started a number of businesses – DE Johnson Electric, Federal Welding, and Blackstone – and did unusual projects for the government. David and Marian owned Jomar Management and David also became a realtor and sold small businesses in Prescott and Maricopa County and was a member of 1 Million Dollar Transactions. David and MarKetta sold ammo cans and military items at the Gun Shows and provided investigation information to Carpenter Hazlewood Law Firm.

David was active in programs with the VA and participated in the pilot program for PTSD. He also participated in the Nurses Program for the VA. David was chosen to go on the Freedom Bird trip, where Vietnam vets were taken to Washington, DC and had the opportunity to visit the Wall. This trip was very helpful to David, especially the Welcome Home Party that Vietnam vets did not receive upon their return home.

David gave all that he had for his country. Agent Orange, which he contracted in Vietnam, was the cause for his medical issues and ultimately his death.

A Celebration of Life was held Sunday, December 16, 2018. The interment of his cremated remains will be held on Thursday, January 10, 2019 at the National Memorial Cemetery of Arizona at 1:00pm.

David will be greatly missed.