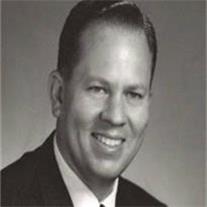 Darrell Fenwick Smith, beloved husband, father, leader, friend and former Attorney General of Arizona, passed away early in the morning of June 5, 2013. He was born in Provo, UT on Feb. 13, 1927, the eldest son of Walter Fenwick and Eleanor Seegmiller Smith. He graduated from Dixie College in St. George UT, served in the US Navy, and served a full time mission for the LDS Church in California. Darrell then moved to Washington DC where he met his sweetheart, Marjorie Ann Hill. They were married in the Salt Lake LDS Temple August 27, 1951. While in Washington, Darrell was active in the Naval Reserves and attended the American University Law School, receiving his law degree in 1956. He passed the DC Bar Exam in 1957 and worked as a law clerk for a judge in the DC Municipal Court. During their stay in Washington, Darrell and Marjorie had three children: Wendy, Becky and Kevin. In October of 1958 he moved his family to Mesa, Arizona where two more children, Karen and Teresa were born. Darrell practiced law in Arizona for over fifty years and served as the Attorney General from 1965–1968. Darrell was an active member of the LDS church, serving in many positions, including, scout leader, Bishop, and Counselor in the Mesa West Stake Presidency. In 1981 Darrell and Marjorie were called to preside over the England Birmingham Mission for three years. He later served as a Stake Patriarch. Darrell was a devoted husband, father, grandfather and friend. He lived a life of Christ-like charity and service and was known for his integrity, honor, and his ever cheerful and positive disposition. He was a builder of people and a faithful servant of his Savior, Jesus Christ. Darrell is survived by his wife, Marjorie, their five children Wendy Shelley (Mark), Becky Woolf (James), Kevin Smith (Denise), Karen Speakman Vance (Blaine), Teresa Starr (Rick) foster daughter, Sylvia Laughter, 28 grandchildren and 22 great-grandchildren. Darrell is dearly loved by everyone who knew him and will be greatly missed by all. Funeral service will be held Tuesday, June 11, 2013 at 10 AM at the Mesa Stake Center (10th Ave. and Hobson) in Mesa. There will be a viewing the night before (June 10, 2013) at Bunker’s Garden Chapel, 33 N. Centennial Way, Mesa from 6–8 PM. There will also be a short visitation one half hour before the funeral on Tuesday morning.