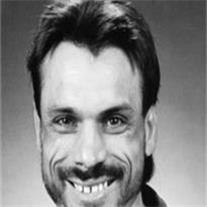 Darrel Vaughn Oliver, 44 years old, born in Decatur, IL, February 16, 1965, died September 9, 2009 in Phoenix, AZ. He was preceded in death by his brother Perry Eulis Oliver Jr. (P.J.). Those who remain are his grandfather Ted Fryer, father Perry, mother Joyce, sister Liz Tech, brothers Bill, Ted, John, Dan, Spencer, brother-in-law, several sisters-in-law, 28 nephews and nieces, and many cousins and friends. Although Darrel was disabled during his life, he loved to be with others, working with computers and helping his friends and family. His viewing will be held on Monday, September 14, 2009 at 10:00 am, followed by services at 11:00 AM at the LDS Chapel at 2334 E. Pueblo Ave. in Mesa. Darrel will be interred next to his brother P.J. at the Mesa Cemetery. Arrangements handled by Bunkers Garden Chapel 480-696-6883.