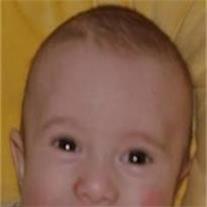 Our Sweet Baby. Daniel William Malnar born March 29, 2013, was called back home to be with Heavenly Father on August 10, 2013. He is survived by his dad and mom, Adam and Emily, his older brother Samuel and his twin sister Holly; grandparents Billy and Beverly Dloughy, Ray and Mary Malnar, as well as aunts, uncles and lots of extended family who loved him very much. He touched the hearts of many in his 4 months here on earth. We will miss him very much, but know that we will be with him again soon. Services will be Thursday August 15, 2013 at 11AM, preceded by a visitation at 10 AM at the LDS building at 1054 W. 2nd Pl, Mesa AZ. Visitation will be Wednesday August 14, 2013 from 6-8PM at Bunker’s Garden Chapel, 33 N. Centennial Way, Mesa AZ.