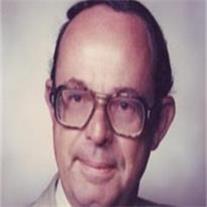 Dale L. Budelier, 81 of Mesa, AZ, died Thursday, January 21, 2010, in Mesa. Dale was born January 29, 1928, the son of Herman and Marjorie Budelier in Rock Island, IL. He married Beverly Lundburg in 1950. He served in the United States Army, and then was employed as Office Manager, Customer Service Division of Iowa, Illinois Gas and Electric, retiring after 33 years of service. After raising his family and retiring he moved to Mesa in 1990, where he enjoyed golfing, dancing and the community of many good friends. He is survived by sons, Dan, (Diane), Mark, Chris and one grandson, Mason. He is preceded in death by his parents and one son David. A Memorial Service will be held on Friday, January 29, 2010 at 11:00a.m., at Bunker’s University Chapel, 3529 E. University Dr., Mesa. Inurnment will be at Calvary Cemetery, Rock Island, IL. In lieu of flowers, memorials may be made to the American Diabetes Association, PO Box 11454, Alexandria, VA 22312 with Dale Budelier on memo line.