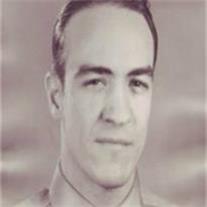 Crandall Bland Giddings, 96. Born 28 December 1915, in Weiser, Idaho. Died 8 April 2012, in Mesa, AZ of complications from a broken femur sustained in a fall. He was preceded in death by his first wife, Elizabeth Anna Kiefer, of Kings Park, Long Island, New York. He was a magnum cum laude graduate of Brigham Young University, with MD and PhD from the University of Cincinnati. He served in the U.S. Army Medical Corps in WWII and the U.S. Air Force during the Korean Conflict. He was a pioneering physician, a founding member of the Society of Nuclear Medicine and a Fellow of the College of American Pathologists who established the first nuclear medicine facility in the Valley (1959). He played the cello with Pablo Casals and Zara Nelsova, and helped found the Mesa fine Arts Association/Mesa Symphony Orchestra, the Arizona Cello Society (1969), and the San Marcos Symphony Orchestra (1989). He was Mesa Artist of the Year (1972) and received the San Marcos Symphony Distinguished Service Award. He was a lifelong genealogist and family historian who took great pleasure in tracing elusive connections, and published numerous books on his family history and ancestors. He loved the wilderness of the American southwest, and was an Eagle Scout and Silver Beaver, and a river-rat who made six Colorado River descents through Glen Canyon and the Grand Canyon with Scouts and Explorers. Wherever he lived, he planted trees; many hundreds over his lifetime, and he was well known for his love of geese. He is survived by his beloved wife of 39 years, Lucille Layton Giddings; step-daughter Cathy Wiggins (Olympia, WA); step-son Hal Trost (White Fish, MT); sons Thomas Crandall (Mesa, AZ) and Luther Val (Silver Spring, MD); grandchildren Calvin Aono Giddings and Naomi Anna Haruko Giddings, and many who loved and will miss his impish sense of humor, generous spirit, and citrus gifts. Funeral services are Thursday, April 12, 2012 at 11, preceded by a visitation at 10 AM at the LDS Harris 2nd Ward, 1455 N. Harris Dr., Mesa, AZ. Burial will be in the American Fork, UT Cemetery on 5 May 2012. Donations may be made to the Southern Utah Wilderness Alliance, 425 E 100 S, Salt Lake City, UT 84111.