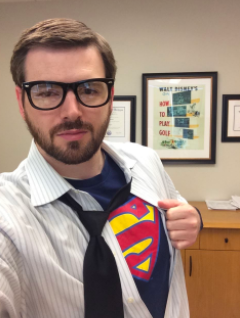 “Most will remember this sad day as the day the proudest most noble man they ever knew finally fell. For those that loved him … this is the darkest day they could ever imagine … for this is the day that a Superman died” (Death of Superman, 1992)

Cory Glen Walker (a.k.a. The Boy Wonder, a.k.a The Real Superman), passed away on March 16, 2022. Cory was born on May 21st, 1982 in Henderson Nevada to Daniel David Walker III and Sherry Anne Mitchell. He grew up in Tehachapi, California and attended Tehachapi High School where he first assumed his secret identity of a mild-mannered reporter writing for the school paper and serving as the paper’s editor. He graduated with the class of 2000.

After high school, he flew the world doing good deeds. He spent a year in Utah studying at Brigham Young University and then served a mission to help the people of Norway from 2001 to 2003. Upon returning he met the love of his life and on May 27, 2005 he married Katie Maren McBride (Lois Lane never stood a chance).

He went back to school and studied goodness and ethics and reason, earning a B.A. in Philosophy in 2006 with minors in Logic and Humanities. Along the way, he published a paper, “Work, Worship, and Grace” in The FARMS Review. That same year he overcame a battle with cancer and started his journey towards being a cancer survivor.

He went on to learn the laws of the land; attending law school at the University of Michigan Law School from 2006 until 2009. He waited out the harsh job market of the post 2008 financial crisis in Las Vegas where he served as an Interim Law Clerk for Honorable Lloyd D. George.

He was an associate at Littler Mendelson from 2010 until 2019 when he was made a Shareholder in the firm.

His life changed forever in 2011 with the birth of twin Superboys: Christopher and Camden. From that day on he devoted his life to their protection and training. These boys are his gift to the world to continue his mission of bringing light and happiness to those they encounter wherever they may go.

In 2013 Cory, Katie, and the boys relocated to Arizona for more adventures. He was a leading attorney for a successful case before the Supreme Court in 2014. In 2015, for their 10th anniversary, Cory bought Katie their current home in Mesa: a fortress not of solitude, but of warmth and joy and love.

On April 20, 2020, just as the pandemic was in full swing, Cory branched out and joined Harvest Health and Recreation (now Truelieve) as their Senior Counsel for Labor and Employment.

Cory spent his days serving others. He had a quick wit and a charming sense of humor. When he was with you he was fully present, and you knew he cared. He saved lives both literally and spiritually and has left memories and a legacy that will not be erased. We love you Cory, our Superman, and we will try to follow your example until we can be reunited again!

Cory’s funeral will be held on Saturday, March 26, 2022 at 11 AM in The Church of Jesus Christ of Latter-day Saints chapel located at 2701 E Lehi Road, Mesa, AZ 85213. The service will be preceded by a viewing at 10 AM. There is an option to attend virtually via webcast at: ​​http://mywebcast.churchofjesuschrist.org/mesaazhvstake.

Funeral plans are being handled by Bunker’s University Chapel (3529 E University Dr, Mesa, AZ 85213). Katie’s brothers have organized a GoFundMe fundraiser for Katie, Christopher, and Camden https://gofund.me/549dbc83. There is also a way that you can contribute to a memory book about Cory by writing a memory or adding a photo in Gratbook (https://app.gratbook.com/book/cory-walker-life). Access to the Gratbook will close March 28 for printing.