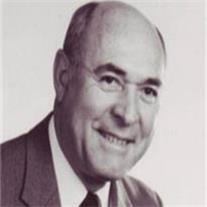 C.W. (Neal) Nielsen, 90, passed away April 17, 2012. Neal was born to Neils Rasmus Nielsen and Mary Alida Wright Nielsen in Salt Lake City, UT on October 31, 1921. Neal served in the U.S. Navy during World War II. He also served as a young missionary in the Northwestern States Mission for the LDS Church. He was a graduate of the University of Utah where he met and married his sweetheart, Virginia Sorensen Nielsen on May 2, 1947. He had a lengthy career in the credit reporting industry, thirty of those years as president of the Credit Bureau of Phoenix which grew to be known as Credit Data Southwest. He was honored to serve in many capacities in this industry including as International President of the Credit Bureau Association. He was a long time member of the Phoenix 100 Rotary Club and the Phoenix Male Orpheus Chorus. He loved working in the Mesa Arizona Temple where he served in many capacities including Sealer. Neal and Virginia served two LDS missions after his retirement (London South and Temple Square in Salt Lake City). Neal is survived by his wife Virginia, sons Jordan (Marsha), Tim (Barbara), Paul (Debbie) and Todd (Kathy). They have 19 grandchildren and 23 great-grandchildren. He has one surviving sister Lois Janke, Salt Lake City. There will be an open house Friday, April 20 from 6:30-8 PM at the Nielsen residence in Mesa for friends and neighbors wishing to express their condolences and memories of Neal. Funeral services will be Saturday, April 21, at 10 AM preceded by a viewing at 9 AM at the Mesa Central Stake Center, 925 N. Harris (south of Brown Rd). Interment to take place in Salt Lake City, UT. Funeral arrangements by Bunker’s Garden Chapel. In lieu of flowers please consider a donation to the LDS Missionary or Perpetual Education Fund at www.ldsphilanthropies.org.