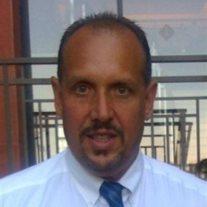 Clifford Raymond Hanks, 47 passed away unexpectedly at his home on May 12, 2014 in Mesa, AZ. Cliff was born in Pittsburgh, PA on June 19, 1966. He was an avid Pittsburgh Steelers, Penguins and Pirates fan. Cliff worked at Honeywell International for the past 27 years and had many friends, co-workers and family who loved him. He is survived by his wife Jace, daughter Kaitlyn, son Christian, step-daughters Jody and Natasha, step-sons Nick and AJ, his granddaughters Chloe and Braxtyn, siblings Mary Ann, Debbie, “Sissy”, and Rick along with cousins, nieces and nephews. He was preceded in death by his parents George and Mary Hanks and brother “Butch” Hanks. Services are Friday May 30, 2014 at 6pm at Bunker’s Garden Chapel, 33 N. Centennial Way, Mesa AZ 85201. For more information go to www.bunkercares.com