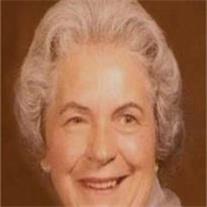 Cleah “Peggy” Brown Mortensen, 94, passed away in Jerome, Idaho on September 7, 2012. Cleah was the daughter of Major Lee Brown and Annie Louisa Lillywhite. She was born in Bisbee, Arizona on June 13, 1918.

Cleah’s parents moved to Virden shortly after she was born and lived there until 1924. She attended grade school and high school in Miami, Arizona, Grand Rapids, Michigan and Mesa, Arizona. After she graduated from high school she went to beautician school and in 1936 started work as a beautician in Duncan, Arizona. Cleah met and married Marion K Mortensen on December 7, 1939, in the Mesa Arizona LDS Temple. Cleah and Marion were longtime residents of Virden, New Mexico. They farmed and ranched there until 1974, when they retired. Cleah loved being active with her family, supporting all their activities. She loved to camp and fish and spent many years going to girl’s church camp while serving in the LDS Stake Young Women’s presidency. She was active in The Church of Jesus Christ of Latter Day Saints, served a mission with Marion in the Eastern States Mission and held many church callings.

Cleah is survived by one brother, Gerald Brown, and one sister, Gwen Waite. She is also survived by her 7 children, M. Kay Mortensen (Beverly) of Sandy, Utah, Richard L. Mortensen (Gloria) of Chandler Arizona, Sherrill Meisner of Phoenix, Arizona, Deborah Thompson (Gary) of Rupert, Idaho, Dorothy Reidhead (Rick) of Pinedale, Arizona, Karin Frodin of Jerome, Idaho, Sharin Nye Wells (Lawrence) of Phoenix, Arizona and their families. Cleah is survived by 30 grandchildren and 75 great grandchildren. She was preceded in death by her husband, Marion K Mortensen, her parents, 7 siblings, 2 grandsons and 1 son-in-law. Cleah lived with her daughter Karin in Jerome, Idaho and was cared for by Karin and Zoila Beltran.