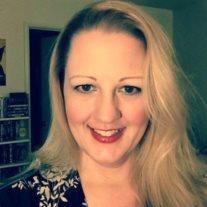 Christine Kerrie Smith, 44, left this earthly existence to return to her Savior’s arms on March 18, 2014. Christine was born on May 28, 1969 in Reno, Nevada to Gregory K. and Darlene D. Smith. Christine was a unique, intelligent, kind hearted, colorful daughter of God. The loss of Christine’s presence on this earth will be greatly felt. Christine’s youth was spent in Reno, Nevada, and Florence & Aloha, Oregon before moving to Arizona in 1983. Christine graduated in 1987 from Corona del Sol High School, Tempe, Az. Christine had a very strong work ethic and started working when she was 16 years old. She worked at various video stores, B. Dalton Books, Sears, Target, Professional Salon Systems, ASM, Ross, and was currently employed at Verizon in Chandler. In her 30’s, Christine enrolled at Central Arizona College, where she was very involved in the Honors Program and Phi Theta Kappa. She graduated with honors in 2009 and was one of the graduation speakers. Christine attended the U of A on a Coca Cola All American Scholarship, and she was 2 classes shy of graduation. She was also studying for her entrance exam for law school. Christine was survived by her son, Brice, 22, who died on March 23, 2014. He was her firstborn and one of her greatest joys. She is also survived by her other greatest joy, daughter, Brogan, 18, of Mesa; mother, Darlene Smith of Mesa ; father, Gregory Smith of Mesa; brother, Russell of Gilbert; sister, Kimberly (Warren) Wing of Boise, Id.; sister, Denise Smith of San Tan Valley; 15 nieces & nephews; aunts, uncle, and 7 cousins. Services will be at 11 a.m. on Thursday, March 27th, at the LDS Chapel at 1350 S. 24th Street, Mesa with a viewing prior to services at 9:45 a.m. to 10:45 a.m. Interment will be at the City of Mesa Cemetery.