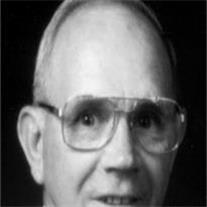 Charles William Adair, age 82, passed away peacefully in his home surrounded by his family on January 20, 2010. He was born August 2, 1927 in Ramah, New Mexico to Alfred and Helena Adair, one of six children. In 1945, upon graduation from Mesa High School, Charles joined the Navy and was soon discharged due to the end of World War II. He 1949 he married his wife of 60 years, Jeannine Slade, in the Salt Lake City temple. During those 60 years Charles worked at the Mesa Post Office, retiring after 40 years. He played both fast and slow pitch softball. He was a faithful member of the Church of Jesus Christ of Latter-day Saints and served in many callings. He is preceded in death by his brothers Al, Milton, Norman, and Leonard Adair and sister LaPrill Taylor. He is survived by his loving and faithful wife Jeannine Adair, five sons Charles Kay (Teresa), Kerry (Dixie), Kendall (Elaine), Karl (Shannon), and David (Stephanie) Adair, 23 grandchildren and 16 great-grandchildren. There will be a visitation on Friday, January 22, 2010 from 6-8 PM at Bunker’s Garden Chapel, 33 N. Centennial Way in Mesa. Funeral services will be Saturday, January 23, 2010 at 2:00 PM preceded by a visitation from 1:00- 1:40 PM at the LDS Church at 1050 S. Hobson in Mesa. Our family would like to give loving thanks to Hospice of the Valley for the tender care they gave our husband, dad, and grandfather in his final days.