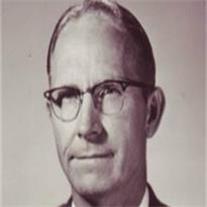 Charles S. Adair, dearly loved husband, father and grandfather, passed away February 22, 2013, at his home surrounded by his family. He was born July 10, 1915, in Luna, New Mexico. Charles was a life-long active member of The Church of Jesus Christ of Latter-day Saints. As a young man he filled a mission for the church in the Eastern States. He served in many positions, but his greatest passion was genealogy. He married Pearl Reidhead March 13, 1942 in the Mesa Arizona Temple. It was soon after that Pearl Harbor was bombed. Charley served over four years in the Air Force during World War II. He was an educator and owned and operated Adair Tax Service for over 50 years. His greatest joy was his sweetheart of over 70 years, Pearl; his children Yvonne (Arthur Molina (deceased), Charles (Jennifer Smith), Carla (Mark NeVille), Kathleen (Richard Romney), Douglas (Karen Louden), Dawna (Lonnie Stradling), Robert (Bethany Stewart), 38 grandchildren, 76 great-grandchildren and 5 great-great-grandchildren. Visitation will be Friday, March 1, 2013 from 6-8 PM at the LDS Kleinman Park Ward, 616 S. Extension in Mesa. Funeral services are Saturday, March 2, 2013 at 11 AM, preceded by a visitation at 10 AM at the same location. Arrangements by Bunker’s Garden Chapel.