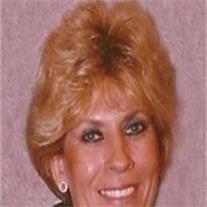 Carole Aston Montierth was born on June 15, 1943 in Phoenix, Arizona to Russell Henry Aston and Cecile Viola Ethington. She was the third of seven children. Surviving brothers and sisters are, Sharon Park, James Aston, Marsha Incardone, Samuel Aston and Russelyn Harmon. She was preceded in death by her twin brother Tommy Aston, who died at birth and her husband Lyle Montierth.

Carole graduated from Phoenix Union High School and on May 21, 1964 she married Perry Lyle Montierth in the Mesa Arizona Temple.

Carole made her living as a meat wrapper, a school bus driver, a realtor and working with her husband in his carpentry business.

Carole loved sewing and painting as well as decorating her home and vacationing with her family in California and at their cabin at Forest Lakes.

She was always willing to serve anyone around her and spent many hours of service for her church.