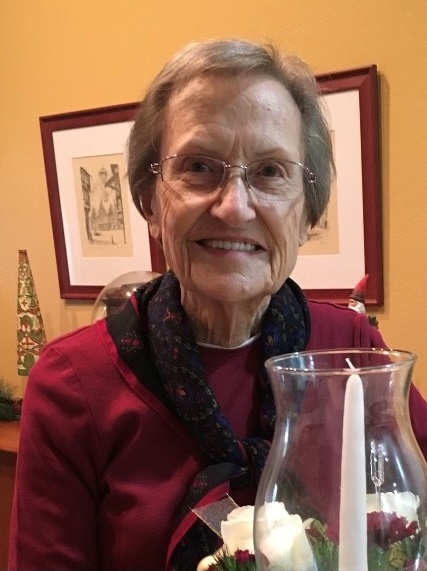 At the end of her life, after a remarkably rapid decline, Carol Beck Boynton was surrounded by a constant flow of family who held her hand, stroked her head, and shared their love. On 25 April 2021 she drew her last breath at the age of 95. Carol lived a happy and full life.

Those closest to Carol who have also passed include her two eldest sisters, Orel and Mary who died as little girls; her beloved parents, Clara Crowther and Orin Beck; her husband, Harold O. Boynton; her daughter-in-law, Nancy Boynton; her sister, LaVee Lamb; her grandson, Blake Boynton; and her great-grandson, Alec Gadsby.

She is survived by her dear siblings, Donna Norton, Ray Scalone, Ron Beck, and Bonnie Foote; her children and their spouses include Rod and Vicki Boynton, Chip and Sandy Boynton, Kristine and David Taylor, Mark Boynton, and Matthew and Kimberly Boynton. Dozens of grandchildren, great-grandchildren, and even one great-great-granddaughter celebrate her rich and interesting life.

Carol Boynton was born 27 October 1925 in the tiny LDS community of Sanford, Colorado where both her maternal and paternal families lived. The San Luis Valley of Southern Colorado was an idyllic place to grow up and informed her happy memories of childhood. In Alamosa just north of Sanford, Carol met a young man called Harold Boynton at a dance. Carol’s family moved to Provo, Utah while she was in high school, and went on to study English at Brigham Young University. She maintained contact with Harold while he served in the Marine Corps during World War II, and after years of long-distance and sporadic in-person courtship, Harold and Carol were married in Long Beach, California where he was stationed. An injury sustained in a car accident precluded Harold from a military career, so Carol encouraged him to pursue his schooling.

With his Bachelors Degree in Education complete, Harold taught for a short time before taking Carol and his growing family to France where he was a principal in the dependent schools for American military families still in Europe post WWII. In France the Boyntons lived on the economy away from the military base in an ancient French farmhouse, sharing it with a French family with whom they became lifelong friends. The time spent in France and Germany is at the heart of Carol Boynton’s family culture. Their love of travel, good food, traditions, tastes, and even their membership in the Church of Jesus Christ of Latter-day Saints all have their roots in Europe. Harold joined the LDS church after his young family moved to Germany, and the Boyntons were sealed in the LDS Temple at Bern, Switzerland in 1961. When Carol, Harold, and their family returned to the United States after seven years abroad, they settled in Mesa, Arizona, her home since the early 1960s.

Carol was a beautiful and refined woman with a great sense of style. She studied cooking at the Cordon Bleu in France and was a gifted and intuitive cook. She was an accomplished seamstress and sewed for her family and for charity. She was a lifelong Relief Society worker who blessed many lives. Reading was a passion and she gathered often with her sisters for a week of reading, laughing, and chocolate, which was food of the gods for Carol. So the family invites you to enjoy some chocolate, a delicious meal, a good book, and think fondly of her.

Carol’s greatest traits were selflessness and empathy, peppered with a sense of humor and a quick wit. She, along with her sisters, cared for their mother in her final years, taking turns staying by her side a month at a time in her own home. When Harold was diagnosed with Alzheimer’s, she cared for him by herself for many years, four of which were brutally difficult. She wore out her life in his service because she didn’t believe anyone else would give him the care she could. Carol was a focused and empathic listener and made those who talked with her feel heard, understood, accepted, and loved. She was, however, also capable of a humorous retort and a meaningful glance.

Carol had a wonderful circle of friends and associates, most of whom preceded her in death. But at the end of the day, it was being with family that brought her the greatest joy. She was proud of her family and loved each of us unconditionally. We love her and her passing has left a void in our lives. But, happily, she will live on in our cherished memories of her life and our time with her.

The Boynton family thanks the staff at Emerald Groves and Carol’s hospice nurses for such good care during her decline and passing. Thanks too, to Bunker Family funeral directors who cared for her with such respect.

The burial will be near her family at the Mesa City Cemetery, 5 May 2021. Her funeral will follow the same day at 10:00 A.M. at the Church of Jesus Christ of Latter-day Saints, 532 South Greenfield Road, Mesa, AZ 85206-2017. In lieu of flowers, please donate to a charity of your choice in Carol Boynton‘s name.