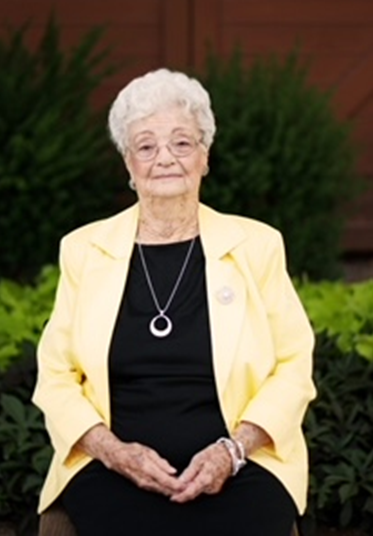 Carmen Alice Bryant, beloved mother, daughter, sister, grandma, wife, and friend passed away on July 21, 2022. She was born on July 18, 1923 in Allen, Oklahoma to James Edward and Stella Mabel McMeans and spent most of her early life on a farm. She had 4 brothers, Kenneth, Riley, C.L. (Corky) and Russell Ellis that all preceded her in death.

She led a very happy, active life filled with family, friends, and many activities such as sewing, quilting, baking, church service, caring for the sick and needy and being a friend to all. Her legacy will continue through her 4 children, 20 grandchildren, 37 great-grandchildren and 5 great-great grandchildren.

She married Eugene Victor Rice on April 11, 1940 and had 4 children in this union.  Gene passed away in 1959 and Carmen later married Raymond Bryant on August 19, 1972.  She gained 2 more “bonus” children from this union and many grandchildren as well.  She is survived by her children Jerry V Rice, Mary (Bill) Johnson, Ruth (Joe) Saavedra, Jane Thomas, and Virginia Morgan.  She was preceded in death by one son, Gene Rice.

Carmen was the best mom, grandma and “grandma great” (as the great grandkids called her) that anyone could have. She will be sorely missed.

Her funeral service will be Monday, August 1 at Bunker’s University Chapel, 3529 E University Dr., Mesa, AZ from 5-7 pm. Viewing/Visitation will be from 5-6 pm and the service will begin at 6 pm. Carmen will then be buried next to Gene in Albuquerque, NM on August 5, 2022.  In lieu of flowers donations to Hospice of the Valley are suggested.