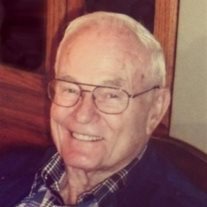 Cal V Rohner, 89, passed away on August 8, 2014, in Mesa, Arizona, surrounded by his family and sweet wife Eyvonne. He was born in Pima, Arizona to Alfred and Lavena Rohner. During his lifetime, Cal worked as a machinist, entrepreneur, contractor, dairyman, and inventor. He built equipment and machinery that was necessary for any task at hand, including parts for his concrete pumping truck as well as go-carts for his family. He joined the Navy and served in World War II. He used his skills in photography in the service and it became a lifelong hobby. Cal was an outdoor chef. He was locally famous in Southern California for his “Rohner burgers”. He moved to Arizona 40 years ago where he was well known for his delicious barbecued smoked beef. He enjoyed spending time with his family and was always involved in serving others, both in and out of church callings, including nearly 20 years of service at the Mesa LDS Cannery. Cal is survived by his wife of 70 years, Eyvonne, five children and their respective spouses, 25 grandchildren, 70 great-grandchildren, and two siblings. Visitation is Thursday, Aug. 14, 2014 from 6-8 PM at Bunker’s University Chapel, 3529 E. University Dr., Mesa, AZ. Funeral services are Friday, Aug. 15, 2014 at 10 AM, preceded by a visitation at 9 AM, at the Mesa East Stake Center, 2228 E. Brown Rd., Mesa, AZ. Interment will be at City of Mesa Cemetery, 1212 N. Center St., Mesa, AZ.