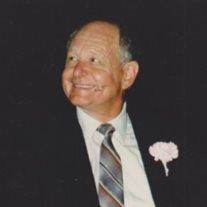 .W. Rains was born on March 26, 1926, in Quay Valley, NM, to Clifton Cletious and Willie Esta Jennings Rains. C.W. was the first of eight children. In 1941, the family relocated to Phoenix and found a home in the neighborhood of Good Samaritan Hospital. The Newmans soon moved in next door. C.W. became friends with Patty Drue Newman. He asked Grandma Newman if he could walk Patty to school. Grandma said, yes, IF, it went no farther. C.W. and Patty married on February 23, 1944. They started their family in 1946, with the birth of C. Gary, and three girls coming later. Patty Denise, Jonita Kay, and Nevelyn (Robert Lynn Schooler). C. W. went into the ministry and graduated from Lee College, Cleveland, TN, in 1954. He and Patty pastored churches in Indiana and Arizona, retiring in 1986 in Mesa, AZ. He worked with sheet metal and was considered to be a master craftsman. After he retired, he made wind chimes using old pipes. He would create a dove out of metal to decorate and hit the pipe, making sweet melodies in the wind. C.W. and Patty worked on a dude ranch outside Durango, CO, during the summer for several years. After the ranch changed ownership, they took their motor home to the White Mountains, making lifelong friends. Patty passed in 2006 after living with C.W. for 62 years. He missed her immensely, joining her in death on June 7th. Funeral services are Monday, June 16, 2014 at 11 AM at the Fountain of Life Church of God, 1718 N. Mesa Drive, Mesa, AZ. Arrangements by Bunker’s Garden Chapel.