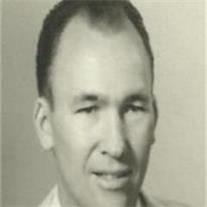 Bruce Chester Hunt, 88, peacefully died on Tuesday April 10, 2012 as he lost his battle with Parkinson’s disease. He had been lovingly taken care of by the staff of The Carriage House in Snowflake Arizona for only 4 days before he passed away. Bruce was a loving, hardworking son, husband, father, grandfather and great grandfather; a brave soldier, an honest business man with integrity and a righteous, valiant man of faith. Bruce was born November 6, 1923 in Joseph City, Arizona. He was sixth of nine children born to Benjamin and Pearl Hansen Hunt who owned and operated Homestead Dairy. He was herding and milking cows as early as age 4. Bruce graduated from Holbrook High School in 1941 where he played on the Men’s basketball team. He put in the final basket for the Holbrook Roadrunners to win the State Championship game his senior year. He served in the Army Air Force as a radio operator. He had many harrowing experiences while serving all over the world. He often delighted his children with bedtime stories of his many adventures from China, India and Iceland. He was honorably discharged in 1946 as a Staff Sergeant. He married Zena Louise Beadle on December 31, 1947. He attended and graduated from the University of Arizona in 1951 with a Bachelors degree in Business Administration. He was a Manager of Foxworth Galbraith Lumber Company in Mesa and Wickenburg Arizona. In 1967 he moved his family to Flagstaff Arizona as manager of Kaibab Cash and Carry Lumber Company. He later purchased this business and renamed the company Hunt’s True Value Lumber Company. He was active in his community as a leader in the Rotary Club. He served faithfully as a member of the Church of Jesus Christ of Latter Day Saints in many capacities; one of which was Branch President in Wickenburg Arizona for 12 years. He and his wife Zena served 2 LDS missions in Ireland and Africa.