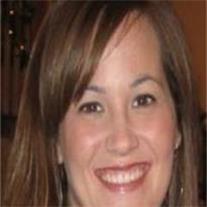 Brittany Anne Schramm was welcomed back to her Heavenly home on January 4, 2013. Brittany was born December 27, 1982 in Phoenix, AZ. She graduated with honors from the University of Utah, with a degree in chemistry and was accepted into the University of Utah Medical School. Brittany, however, knew that her hopes and dreams lay in raising a family, so she chose to forego medicine, marrying her sweetheart, Jeffrey Schramm, December 17, 2005, in the Salt Lake LDS Temple. Her dreams came true with the births of Alexis (5) and Jackson (2), her two cherished children, whom she taught by example to love, dance, sing, and laugh. They lived in Utah and Texas before moving to Arizona. Brittany enjoyed playing the piano, biking, and jogging. She had an innate ability to care for and love others even in times of great personal adversity. While training for a triathlon in April 2012, Brittany was involved in a biking accident which left her paralyzed from the chest down. Brittany spent the next 9 months learning to care for herself and family, despite her handicap, struggling with great pain and difficulties. She was a shining example of courage as she surmounted great obstacles, learning how to sit up on her own, do pushups, and drive the car, all while continuing to be an amazing mother and wife. She lived her life strong in spirit and love. She vowed she would walk again in 2013; and she is walking now. Brittany was an active member of the Church of Jesus Christ of Latter-day Saints. She is survived by her husband, Jeffrey Schramm; children, Alexis and Jackson; her parents, Greg and JoRita Nielsen, one sister, Jennifer, and a brother, Eric. Services will be held at 10:00 AM on Saturday, January 12, 2013, at the Salt River LDS Stake Center, 6942 East Brown Rd, Mesa, AZ, with a memorial gathering from 6:00 to 8:00 PM, Friday, January 11, at the same location. Arrangements by Bunker’s Garden Chapel, 480-696-6883.