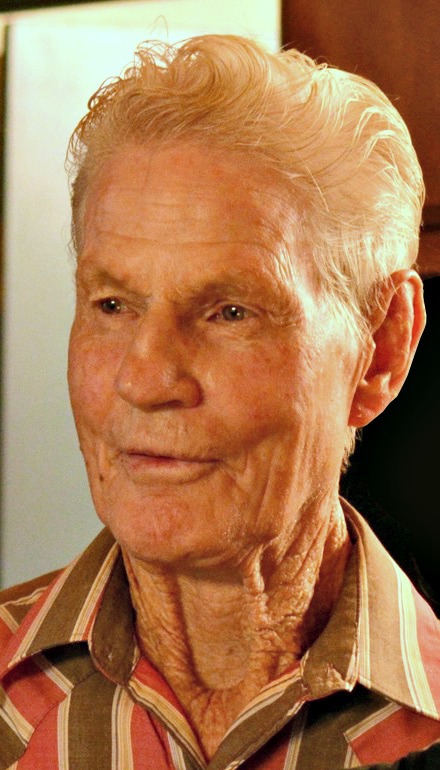 Boyd Hill Hatch, husband, father and grandad, quietly passed from this life to join his eternal companion Joyce on February 1, 2017.

He was born August 22, 1926 in Taylor Arizona to Lorenzo John Hatch and Julia Wakefield. He was the seventh of ten children, and though this large family was raised in humble circumstances, his childhood was filled with fun, mischief, and love. Boyd spent those years running around with his brothers, hunting, fishing, playing ball and developing a strong sense of love and loyalty for family which motivated him his whole life.  At a young age he learned to work hard and continued to do so the rest of his life. He spent his teenage years working alongside his Dad doing plastering work and carpentry, and shearing sheep in Montana for many summers.

During WWII he served in the Philippines and as an MP stationed in Japan. On his return he attended Arizona State College, studying Physical Education and Construction. He excelled in basketball, and served as A.S.U.’s team captain his junior and senior years. Decades later he could still recall in detail a certain play he and his teammates ran against an opposing team. He eventually took his love of basketball on to the coaching level.

He became a Physical Education teacher and taught at both Scottsdale and Snowflake High School for over 30 years. He taught a great number of young people how to work hard, hone their skills, and to gain self-discipline.  He enjoyed coaching baseball and basketball for most of those years, the highlight of which was having the chance to coach his son Kirk. Their team went on to win the State Championship in 1982. That same year he was named Arizona’s coach of the year, and was later honored by Snowflake High School being named coach of the century.

Boyd was married to Priscilla Joyce Pursley who became his other half and together they raised seven children: Tony, Debbie, Brenda, Guy, Adele, Kirk and Becky, in the communities of Mesa and Snowflake. While he taught school, coached, and built homes in the summer, he still made time to spend with his family camping, hunting, and enjoying the mountains that he loved.

In his later years he and Joyce retired to their cabin in Pinedale. One of the many things he loved about being there was raising mules with his brother Gary at Long Ears Ranch. His talent for training animals was a gift; he could lay a horse down, talk a mule into almost anything, and had the gray squirrels coming to eat out of his hand. During these years he spent so much of his time giving and serving. He took grand kids under his wing, teaching them to work at his side and taking them riding and out roaming the woods.  He used his carpentry skills to build or renovate many people’s homes. He was a life-long cook, and scarcely a week went by without him baking a batch of pies and delivering them to family and friends all over the White Mountains. He was never happier than when he was doing something for others.

Boyd and Joyce were active members of the Church of Jesus Christ of Latter Day Saints and enjoyed serving in the Snowflake Temple for many years. Boyd’s time at the temple was one of his greatest joys.

He is survived by his one remaining sister, Myrtle Reidhead, and his seven children, as well as 36 grandchildren and 78 great grandchildren, all of whom dearly love their Grand Dad Hatch.  We are so grateful for the constant loving care from daughters Adele and Debbie and son-in-law Kenneth Lewis and the many helping hands from the rest of the family.

We are grateful for the loving and gentle care of the Reflections Hospice workers, especially Jill and Amy, Lucy, Andrea, and Dr. Shirif.

Thank you Dad for all you taught us and especially your example the last couple of years of acceptance, submission, kindness and gratitude.

We love and miss you and Mom. We are grateful for the knowledge that someday we will be with you again.

Funeral services will be held Saturday, February 25, 2017 at 1 PM, with a visitation at 11 AM,  at The Church of Jesus Christ of Latter-day Saints, Pinedale Ward, 5150 Hwy 260, Clay Springs, Arizona. Interment will be at the Pinedale Cemetery, 5442 Center Street, Pinedale, Arizona.