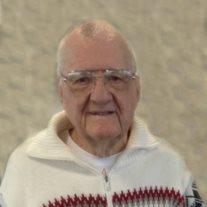 Boyd Earl Farnsworth passed away in Mesa, Arizona on April 27, 2014 at the age of 91. Boyd was born on February 14, 1923 in Colonia Garcia, Chihuahua, Mexico, the third of eight children in the family of Earl Benjamin and Nora Leona Humphreys Farnsworth. He graduated from high school at Juarez Academy in Colonia Juarez. He later joined the United States Army during World War II and fought in New Guinea and the Philippines. He married Mary Hull in 1948. After they divorced, he moved to Placerville, California, where in 1953 he married Adeline (Kitty) Griggs. There he worked for Michigan-Cal Lumber Company, Aerojet General Corporation, and the USDA Forest Service, from which he retired in 1984. Boyd served faithfully in many callings in the LDS Church, including as a beloved Bishop of the Placerville Ward. He loved playing basketball and could hold his own with much younger players. He also loved to arm wrestle with the young men. When he retired, he and Kitty moved to Mesa, Arizona. They were missionaries in the Chile Angol Mission in 1987-88. A great joy in Boyd’s life was serving as a temple worker in the Mesa, Arizona Temple for 25 years. He is survived by his wife, Adeline, daughters Debra and Betty, eight grandchildren, and thirteen great grandchildren. A viewing will be held at Bunker’s University Chapel, on Thursday, May 1, 2014 from 10-11AM, followed by a brief graveside service at City of Mesa Cemetery.