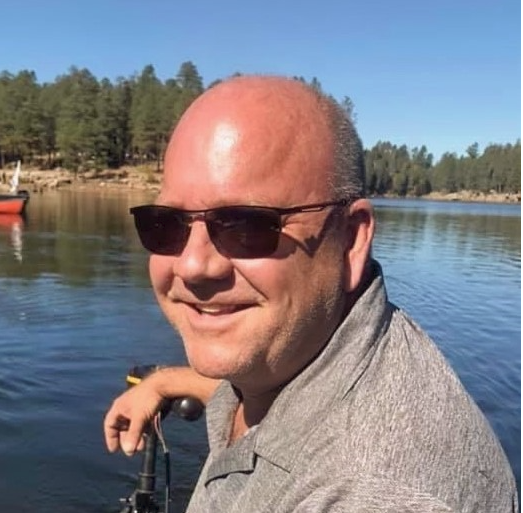 Blaine Todd Wiegel, 62, went to join his Father on Friday morning, 13 May 2022.  The son of the late John F. Wiegel and Patricia (Glad) Wiegel of Mesa, Blaine was born 31 March 1960 at Ft Monmouth, NJ.  Because his father served in the US Army, Blaine and his family lived in a number of places across the US and also in some exotic foreign locations as he grew up.

In 1977 his Dad retired from the Army in Virginia and the family moved to Mesa where Blaine attended Mesa High.  Blaine met his sweetheart Shannon Harris while at Mesa High and they were married in June 1979.  He worked in the HVAC business in the Mesa area for a number of years as their young family grew, Adam arriving in 1980, Joshua in 1983, and Meagan in 1988.  Blaine’s career responsibilities expanded as he worked hard and completed a number of college courses and professional certifications.

In 1990, Blaine, Shannon and family pulled stakes and moved up to the Puget Sound area out to the peninsula and the small town of Sequim where they lived for 10 years.  Blaine decided on a career shift in 2000 and returned to Mesa, where he re-joined the HVAC business. As COO, he guided the company to be one of the area’s largest HVAC providers, until his retirement in August 2021.  With an unparalleled work ethic and passion for his employees and everyone he came across, Blaine will be forever respected and aspired to in the industry.

Blaine enjoyed golfing with friends, hiking, or fishing among the outdoor areas of Arizona.  With a third generation green thumb, Blaine created and maintained an expansive garden and fruit trees at his home on Sunnyvale.  But the joy and very best of his days were when he spent time playing, teasing, and doting on his seven grandchildren whom he adored and spoiled with a laugh and a big smile.  He had an adventurous spirit, enjoyed traveling to new places and always planning his next adrenaline rush.  Some of his best adventures included skydiving, parasailing, and gliding.  With a big smile that would light up a room, his energy and love were contagious.

He is survived by his mother, Patricia Wiegel of Mesa; sons Adam Wiegel (Kate) of Lynnwood, WA; Joshua Wiegel (Amanda) of Queen Creek; and daughter Meagan Lopez (John) also of Queen Creek, their mother Shannon Wiegel, and the cutest bunch of grandchildren.  Also mourning his passing are his two sisters Michelle Miller (Dennis), and Melanie Perkins (Keith) all of Mesa as well as his brother Kevin (Mindy) of Sun Lakes and a multitude of nieces and nephews.  Blaine was preceded in death by his father John Wiegel.

The family will gather with friends for a memorial service honoring Blaine on Saturday, 21May2022 at 10am at the Church of Jesus Christ of Latter-Day Saints chapel at 825 South 32nd street, Mesa.  In lieu of flowers, the family asks that donations be made in the name of Blaine Wiegel to the American Heart Association or to your preferred charity or scholarship fund.