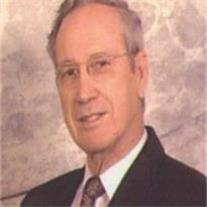 Bill J. Brisco, 83, of Mesa, Arizona passed away peacefully at his home March 29, 2011. Bill was born February 26, 1928 to parents, Orba and Lucy Brisco, in a tent in Hobart, Oklahoma during heavy snowfall. Orphaned in his teens, he was blessed to live with the Keck Family of Buckeye, Arizona until joining the U.S. Army Air Corps in June 1946. Bill dropped out of Buckeye Union High School to serve his country until May 1949 as a radio operator and crewman aboard B-29 Superfortresses in the Strategic Air Command. Following his military service, Bill went on to earn both his M.S. and Ph.D. degrees enabling him a long and distinguished career in education. He taught at nearly every level, from small reservation elementary schools to the associate professor level at the University of Missouri. Following the election of President Lyndon B. Johnson in 1964, Bill was asked to join the U.S. Department of Education in Washington D.C. in an effort to craft reforms and policy at the national level for the U.S. education system. In addition to teaching, Bill was an experienced administrator, working as the Superintendent for International Schools in South America and for over 20 years in the U.S. Army education system at Ft. Eustis, Virginia and Amberg, Germany before retiring and moving back to his beloved Arizona. Bill served selflessly within the Church of Jesus Christ of Latter-day Saints for many years. He enjoyed a variety of equally important roles, from Sunday School teacher to Bishop. Bill enjoyed the company of people regardless of their background, color, or religion. He enjoyed talking with, but enjoyed working with them even more. Bill loved classic cars, the desert, traveling, photography, and classical music. He was positive, self-reliant and never quit, right up until the end. Within his “Greatest Generation