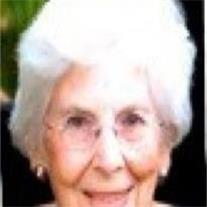 Beverly Miller, 88, passed away peacefully at home with her family at her side on August 23, 2011. She was a lifelong Arizona resident, born in Casa Grande March 22, 1923 to Teressa and Roland Boyce Sr. In 1951 she and her husband Jack moved to Eloy and established Miller Hardware. She was preceded in death by her husband Jack Miller, granddaughter Jacqueline Miller Tapia, brothers Lawrence Hill and Roland Boyce Jr. and sister Maxine Ryan. Beverly is survived by her sister Mary Lewis of Bremerton, Washington, daughters Beverly Miller and Mary Ann Cahn and sons John Miller and Bill Miller. She is also survived by seven grandchildren and four great-grandchildren.

Rosary and Mass will be celebrated at St. Helen of the Cross Catholic Church in Eloy on Friday, September 2 at 11:00 a.m. In lieu of flowers, you may make donations payable to the University of Arizona Foundation/Arizona Cancer Center & mail to 1515 N. Campbell Ave., PO Box 245013, Tucson, AZ 85724.