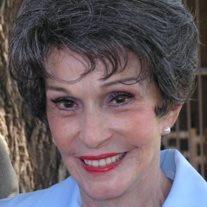 Beverley June (Dana) Goebel died peacefully in her home in Paradise Valley, 15 May 2014, after a courageous battle with cancer. June, as she was called, was born 11 August 1926, in Mesa, Arizona, the first born child of Gail Alexander Dana and Nedra Lee (Vance) Dana. She grew up in Mesa and lived there until she met the love of her life, August John Goebel, at a dance at the Mezona. They were married 31 December 1945 in Mesa, and then moved to California where her husband, August, was completing his law degree. From this union, three children were born. Stephen Dana Goebel, August John Goebel Jr., and Debra Christin Goebel.
She is preceded in death by her parents, her husband August, who died in 1983, one sister Elladene, and her son August John Jr., who lived only one day.
She is survived by her son Stephen and wife Kristen (Peterson) Goebel who reside in Mesa. Her daughter, Christin and husband Michael Seals of Chandler. One brother, Curtis and wife Lola (Gylling) Dana, and two sisters, Bonnie and husband William Workman, and Leann Hogle, known as Lanny, all of Mesa. She is also survived by seven grandchildren. August and wife, Melissa (Smith) Goebel, Courtney and husband Greg Noel, Alexander and wife Ashley (Goodman) Goebel and Elise Goebel, John Michael and wife Nauni (Bredsguard) Seals, Stefani (Seals) and husband Eldon Larson, and Christopher Seals.
She is also survived by six great-grandchildren. Reed, Ridge and Jade Goebel, Xander and Zane Larson, and Olivia Seals with one more great-granddaughter due in August.
June was a member of the Church of Jesus Christ of Latter-day Saints and was active in the Chaparral Ward in Paradise Valley. She was sealed to her husband, August, in the Mesa Arizona Temple, 22 February 2005.
Interment will be in the Mesa City Cemetery on Friday, the 23 of May 2014 at 10:30 AM, preceded by a visitation at 9 AM at Bunker’s Garden Chapel, 33 N. Centennial Way, Mesa, 85201.