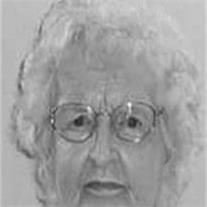 Betty Lou Shutts Kishpaugh, 82, of Queen Creek, AZ, passed away peacefully on July 2, 2011, from complications due to a stroke. Betty was born April 27, 1929, in Artesia, CA, to Kenneth Birch Shutts and Vera Benjamin Shutts. She graduated from Excelsior High School in Norwalk, CA, and later attended Business College. Married in 1949, to Dean Golden Kishpaugh, Betty was a dedicated wife, mother, and grandmother who spent her life in the service of her family and others. She was a homemaker and was best known for her talent as a cook. She was a member of the Church of Jesus Christ of Latter-Day- Saints, currently in the Cortina 1st Ward, Queen Creek AZ North Stake. Family, friends and acquaintances considered her kind, gentle, loving and without guile. Just by being in her presence, one was inspired with the desire to become a better person.

After raising their family in Reno, NV, then traveling the country in their 5th-wheel trailer, Betty and her husband served as proselyting missionaries in the California Fresno Mission from 1994 to 1995. They also spent time as temple workers in the Oakland, Las Vegas and Reno Temples. After residing in Nevada for 42 years they relocated to Queen Creek, AZ in 2002. Betty is survived by her husband of 62 years, Dean Kishpaugh, her four sons Daniel (Nancy), Richard (Brenda), David (Lynn), and John (Darcine), 24 grandchildren and 19 great-grandchildren.

Visitation is Wednesday, July 6th, from 6 to 8pm at Bunker’s Garden Chapel, 33 N. Centennial Way in Mesa. A graveside service is scheduled for Thursday, July 7, 2011, 10:30am, at the Veterans National Memorial Cemetery in Phoenix, AZ.