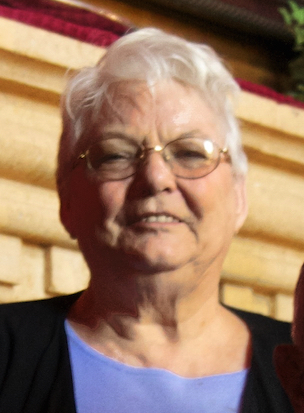 Bertha Lee Lewis Day of St. Johns, AZ, and recently of Legacy Assisted Living in Mesa, AZ, passed away on Saturday, April 11, 2015. She was surrounded by all of her 8 children and many of their spouses.

Bertha was the 8th of Raymond Grady and Bertha Hine Lewis’ 10 children and was born August 24, 1932, in Carlsbad, New Mexico. Her early life was spent on ranches in New Mexico and later, in Sanders, AZ where her parents ran the post office, gas station, café and trading post. She was a bright, energetic child who developed an early love of reading. She graduated early from high school at age 16 and then excelled as a younger-than-usual student at Northern Arizona University. There, she was the editor of the Lumberjack, her junior and senior years. Both years, the yearbook won national awards. She also was the Student Body Secretary and the Outstanding Woman Student of the Year two years in a row. In her senior year, she met and fell in love with Joseph Marlow Day. They were married the day after graduation. The President of the university performed their marriage.

As a member of the Church of Jesus Christ of Latter-day Saints, she served in many positions.  She was dedicated to her faith and to her family.

As a 1st thru 3rd grade teacher, Bertha loved the hundreds of children she taught during her career. She delighted in giving them the same joy for reading and learning she treasured thru her life.

Though Bertha was plagued with poor health in her adult years, she gave unfailing service to many, and most especially, to her family. She took care of each of her parents and also her husband’s parents, until their deaths, even as her own health failed. She continued to work diligently in genealogical research and gave cheer to others. She never lost her sense of fun and kindness, her joy in her family or the beautiful smile and quick wit she shared with everyone.

When she and Marlow moved to Mesa into assisted living, her days were brightened by daily visits from children and grandchildren. But part of her heart stayed in St Johns.

Funeral Services will be held Saturday, April 18, 2015 at 10am in St. Johns, in the downtown chapel of the Church of Jesus Christ of Latter-day Saints. Visitation will be at 9am in the Relief Society Room. Burial will be in the Westside Cemetery in St. Johns.