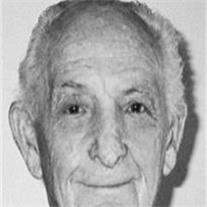 Bernard Chandler Hansen, 91, of Tempe passed away on Sept. 16, 2010. Bernie was the beloved husband of Ada Hansen. His first wife, Melva and his oldest daughter, Janet Hansen Konopnicki (Bill) preceded him in death. He was the beloved father of 5, Janet, Gregory Ray (Deana), Kathy Hansen McVaugh (Joseph), Alan Bernard and Gary Kent Hansen. He had 14 grandchildren and 25 great-grandchildren. He was raised in Weiser, ID. He was a Boy Scout and earned the rank of Eagle Scout. He attended BYU on a track scholarship. He set records in the 100 and 220 yard dashes that held for 10 years. After graduating from BYU he joined the Air Force, became a pilot, then a decorated pilot instructor with the rank of Major when he retired. He loved flying and even got to fly with the Thunderbirds at Williams AFB. He loved to tell stories about his AF years. Bernie was known for his calm demeanor and love of gardening. He LOVED giving his friends and family the fruits and vegetables he would grow. He loved taking his kids and grandkids fishing. He lived in Safford, Chandler, Mesa, Yuma, Payson and had a summer home in Pine, AZ. He loved taking his 3 sons on father and sons camping trips. He was a lifetime member of the Church of Jesus Christ of Latter-day Saints and he loved the Lord and his family. He will be greatly missed until we meet again in Heaven and are reunited as an eternal family. Funeral services are Saturday, Sept. 25 at 10 AM, with a visitation at 9 AM at the LDS Del Rio Ward, 1881 E. Del Rio, Tempe. Interment will be at the Pima, AZ Cemetery. Arrangements by Bunker’s Garden Chapel.