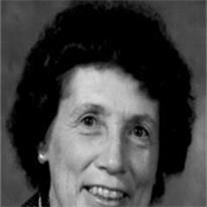 Bernadene Melva Raymond passed away June 21, 2010. She was born January 18, 1926 in Royal, Iowa to John & Gertrude Streufert. She moved to Arizona in 1953 with her first husband, Gerald Graham, who passed away in 1960. She is survived by her second husband, Daniel Raymond, whom she married in 1963, her brother Wayne Streufert and his children, a son Aaron Raymond, three step-children, Ronald Raymond, Gary Raymond and Linda Anderson, five grandchildren and seven great-grandchildren. She was preceded in death by her sister Delila. Bernadene was a lifetime member of Rebekah’s and had been a Grand Matriarch. Memorial service will be June 28th at 10:00a.m., at Bunker’s University Chapel, 3529 E. University Dr., Mesa, AZ. The family sends thanks to Hospice of the Valley.