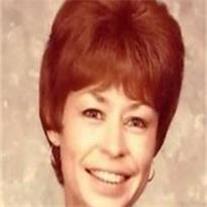 Barbara grew up in Huntington Beach, California moving to 29 Palms where she met Dwayne Colaw and they married on January 22, 1955 in Yuma, Arizona. They lived in Indiana and California, moving to Scottsdale, Arizona in 1968 where they went their separate ways. After their divorce, Barbara met and married Bruce Hansen on May 9, 1971 in Las Vegas. Barbara and Bruce loved living in Scottsdale where she spent tons of time with her grandchildren, pursued her education at Scottsdale Community College, Bible study, gardening, enjoyed her doggies Sheba, Caper, Shandu and Katy, and took trips to Jerome, Sedona, the White Mountains, and San Diego. Barbara was talented with cosmetic arts, ballroom dancing, bowling, music, cooking, astrology, and could shop for days. Barbara was a sophisticated, spirited woman, full of fun and fire, whose concern for her family and friends was constant. She lived by strong ethics, carried herself with class, and expected as much of herself as those she loved. She returned to California where she worked as a librarian and C.N.A., and was able to care for her mother before she passed. Barbara was devoted to her mother and carried on with the care of her cats, eventually moving many of them with her to Mesa when she returned in 2005, and she loved them all dearly, bringing her grief when Beau and Sunshine passed. Barbara was very appreciative of the care and support provided by Hospice of the Valley these past months, and knows how much they helped her daughter with the difficult journey. Memorial services for Barbara will be held on October 5th at 1:00 p.m., Bunker’s Garden Chapel, 33 N. Centennial Way, Mesa, Arizona, 85201, 480-696-6883. The family suggests donations to Hospice of the Valley, 1510 E. Flower St., Phoenix, Arizona 85014