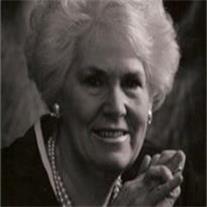 Annette Davis Bowen, of Gilbert, AZ passed away peacefully on January 7, 2012. She was born February 1, 1937 in Greer, SC to Harry Lee and Helen Davis. She began her employment with Banner Good Samaritan Medical Center in 1974 as office coordinator in Family Practice. In early 1989, she transferred to the Medical Education department as an administrative assistant, and was soon promoted to office coordinator and later became the office manager, where she retired after 33 years of service. She witnessed more than 3,000 residents and fellows graduate from the residency programs during this time and had the uncanny ability to remember each one of them by name or face no matter how many years had passed. She was referred to by many titles during her lifetime, ‘administrator, supervisor, confidant, counselor, life coach, friend, house mother or den mother’ but none did she hold more dear than that of Mother and Nana. She was the epitome of love, grace, and courage and will forever remain ‘the heart of the family’ and an example for us all. Annette is survived by her mother, Helen Davis of Anderson, SC; her children, Theresa Cody (Mac) of Richardson, TX; Michael Bowen of Tempe, AZ; Scott Bowen (Brenda) of Gilbert, AZ; Lori Whittle (Cory) of Parker, CO; Shauna Dixon (Kenneth) of Gilbert, AZ; and Tracy Brothers (Scott) of Liberty, SC; her brothers, Guy Davis of Anderson, SC; Tony Davis (Donna) of Simpsonville, SC; her beloved grandchildren, Jayson Cody; Heather Mueller (Randy); Sara Cody; Michael Bowen; Michele Bowen; Scott D. Bowen; Kyle Whittle; Taylor Whittle; McKenzie Whittle; Jordan Dixon; Devin Dixon; and Holle Brothers; and one great-granddaughter Margaret (“Maggie