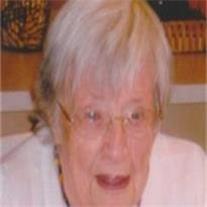 Anna Mae Hinrick was born on September 28, 1924, on the family farm near Little Rock, Iowa, to Ferd and Maggie (Block) Hinricks.

Anna Mae grew up helping on the farm and graduated from County School and from Little Rock High School in 1941. She worked in a cafe and worked at Sibley Creamery for four years. She then moved to Pella, Iowa and attended Central College. She graduated with a degree in Sociology.

She moved to Des Moines, Iowa and worked for Blue Cross and Blue Shield. She was faithful to her work and worked in the Claims Department for 35 years and then retired.

On July 9, 1944, Anna Mae confessed the Lord Jesus Christ as her Savior and joined the Salem Reformed Church of Little Rock, Iowa.

When she moved to Des Moines, Iowa, Anna Mae became a member of Bethany Reformed Church. She was Sunday School Superintendent and also taught in Sunday School.

After retiring, Anna Mae and Harold did quite a bit of traveling with their trailer visiting many states and friends and attending Camp Meetings. They moved to Arizona and joined the Desert Haven Community Church where they are members at this time.

Anna Mae was preceded in death by one sister, Jennie LaVonne Drenth and her parents, Ferd and Maggie Hinricks. She is survived by her husband, Harold D. Klaassen and two brothers, Willis Fred Hiricks of Ankeny, Iowa and Bruce Henry Hinricks of Denten, Texas. Plus a large number of nieces and nephews.