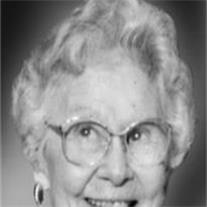 Anna Evelyn Parrish, known to her friends as Anne, passed away peacefully on Sunday morning March 7, 2010 in Mesa, AZ. Anne was born on May 6, 1914 in St. Inigoes, MD. Anne will be missed by her son, Bob Howells and wife Linda of Los Altos Hills, CA, her six grandchildren, Shelley, Kim, Christy, Darin, Jason and Joshua along with eight great-children and two great-great-grandsons. Anne moved with her husband and family to Phoenix in 1956. Before retiring Anne was employed by the Veteran’s Administration and later, the Phoenix Indian School. In addition to enjoying time with her family and friends, Anne enjoyed needlepoint, rock collecting and square dancing. Visitation and Rosary will be held Thursday at 6:00PM at the Bunker’s Garden Chapel, 33 N. Centennial Way, Mesa, AZ and a funeral mass at 10:00AM Friday at Queen of Peace Catholic Church, 109 N. MacDonald in Mesa.