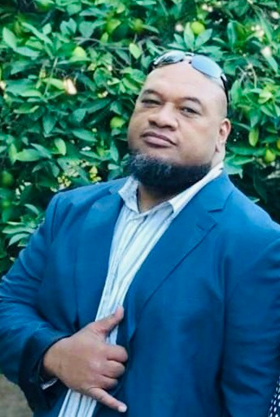 He was preceded in death by his mother, Finau Kesaia Alatini Mafi. He is survived by his father Kalisi Fonua Mafi, his sister Laukau Ioelu (Pani) and his two brothers Peni Mafi (Heidi) and Kapono (April) Mafi.

His legacy will be continued through his two beautiful daughters, Finau Amelia Laukau Mafi (13) and Samiyah Lauorisia Mafi (5).

His name was given to him by his mother’s sister, Faaki Alatini Richter. He was the first baby in the family she named while serving on a mission.

When he was just 3 years old, Amoni and his families immigrated from Tonga to the United States. They settled first in Hawaii and then eventually making their permanent home in Arizona. He would go on to graduate from Maryvale High School in Phoenix, AZ.

Most of his youth he spent refining his skills in many handy trades. He loved using tools to fix, repair and build things. He could often be found under a vehicle, and he became an amazing auto mechanic. He had a passion for music and stereo systems. He enjoyed driving the streets of Arizona blaring reggae music that would wake the neighbors and rattle their windows.

He loved to attend dances and would often gather those same family and friends to play volleyball around town. He was always positive and an optimist. He could often be found pulling a funny prank and joking around.

At the age of twenty-one, he decided to volunteer two years of his life to the Lord. He served an honorable full time LDS mission in Oakland, CA. Several months after his return home, he would meet and marry Mahana Lesieli Muchnick. Over their eighteen years of marriage, they would experience life in Washington State, Utah, and Arizona. They remained best friends for the remainder of his life.

Fortunately, he was able to accomplish many life goals and pursue more talents. Some of those things included leadership roles in church, being a foster parent to many young children, trying his hand as real estate investor and flipping his first home, owning a farm and petting zoo, continually working on handyman projects, fishing and camping, mixing music as a DJ and collecting thousands of CDs and cassettes over the years, helping his dad record VHS at all community dances and events, cooking and creating  delicious marinades and recipes, BBQ’s and cookouts, an avid collector of reggae music, and last but not least he was in constant pursuit to grow back his dreads. If not on the top of his head, then on the tip of his chin.

He was his mother’s son. He loved his mother first and always. One of his favorite memories is how his mom had big, soft arms and how he would cuddle into them from childhood to adulthood whenever he was with her. She would hum songs and talk with him for hours. Sadly, he laid his mother to rest just short of a year before he passed. We have no doubt he is in the arms of God as well as the arms of his mother, again.

Amoni spent his entire life being selfless in his love and support towards his countless nieces, nephews, cousins, and friends. Everyone who met him, loved him. He worked at FedEx and had dreams of retiring there after 30 years. At the time of his passing, he had been there for more than 22 years.

When we think of Amoni, we will remember how loving, kind, genuine and caring he was. We know that the life he lived, and his heart of gold will perpetuate his legacy for eternities. Until we meet again!