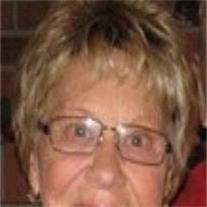 IN MEMORY OF ALTHEA STREMLER

Althea Stremler, age 73, met her Lord at Heaven’s Gates on April 6, 2011. She was born to Arie and Katherine Molenaar in Crookston, Minnesota on May 25, 1937, the third of nine children. Her family moved to Peoria, Iowa when she was five years old and later moved to Lynden, Washington when she was ten years old. She attended Lynden Christian Grade School and First Christian Reformed Church.

Harold and Althea Stremler were united in marriage on April 5, 1986 and celebrated 25 years of marriage. They loved to travel in their motor home and volunteered with CRWRC for 15 years helping families and communities across the U.S. in their disaster recovery efforts.

Althea loved life and contributed something to every life she touched. She was a much-loved grandmother and especially loved being with her grandchildren. Flowers and gardening were her favorite hobby and her home was a cheery place for everyone to visit.

Contributions may be made to, Americare Hospice & Palliative Care, Mesa, Arizona.