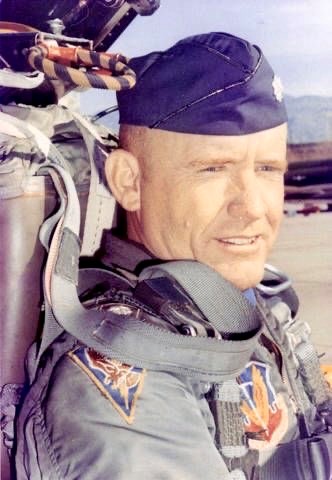 Alma Walser Skousen passed away in the company of his family, in Mesa, Arizona on September 8, 2022, at the age of 96. Alma was born a US Citizen in Colonia Dublan, Chihuahua, Mexico. His parents, Angus and Gertrude Skousen, farmed in Mexico until they moved as a family to the United States when Alma was 15 years old. He lived a full and happy life. He had a love for aviation that began at a young age and continued throughout his life. He joined the Army Air Corp at the tender age of 17 and served five years until being honorably discharged in 1946 just before WWII ended. He joined the USAF, applied as an aviation cadet and was accepted into their training program in 1950. He completed flight school and became a jet-fighter pilot, serving missions in Korea and Vietnam. He completed 26 missions in Korea, over 100 in North Vietnam, and 33 more in South Vietnam. Alma survived a forced crash landing due to mechanical error over Lind, Washington. He was able to continue his flight career after recovering from a broken back and served in the USAF for 23 years. He retired as a Lt. Colonel serving his country over a span of 28 years. Alma married his first love Lorna, who was his wife of 57 years. During his career, they raised a large family of 9 children. Alma and Lorna ran a Stretch & Sew fabric store in Peoria, Arizona for 7 years. After Lorna passed, he married his second love Phyllis, his wife of 12 years. He loved all his family.  He taught his children to love one another and to love their mother, our Heavenly Father and Jesus Christ (whom he considered his hero). As a father, his teachings of unconditional love were one of his greatest gifts.  Alma’s many descendants remember him as a loving father, grandfather, an ardent patriot, and a man of deep faith and love.  He is survived by his wife Phyllis, his children, 43 grandchildren, 69 great grandchildren and 3 great-great grandchildren. We love you Dad, God speed.