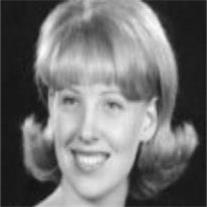 Our most beloved wife, mother, grandmother, daughter, and sister, Alison, passed away December 1, 2012, in Mesa, AZ, at age 66. She was born to Maren Eccles and Ralph Williams Hardy in Ogden, Utah, on April 9, 1946. She was raised in Washington, D.C., and lived in Salt Lake City, the greater areas of Los Angeles and San Diego, and Mesa, Arizona, where she spent the final 15 years of her life.

Alison is remembered for her warmth, love, generosity, and her magnetic personality. She dedicated her life to family and serving others. Her family and close friends knew of her unrelenting strength and qualities forged by significant events in her formative years. The unexpected death of her father when she was 11 was a seminal event. Her widowed mother entered the workforce and singlehandedly raised Alison and her four siblings, providing a lifelong lesson in courage, work, and devotion. She was injured in a severe car accident at age 18 the aftermath of which was burden she bore well contributing to her bedrock trait of perseverance and a fighting spirit.

After viewing “Cheaper by the Dozen” at an early age, she determined that she would have twelve children. In what serves as the epitome of her persist nature she went on to bear six boys and six girls, adopted three children who were refugees of the Vietnam War, and along with her husband, raised fifteen children.

Alison studied music at the University of Utah, where she was first chair violinist. The tone of her violin was moving, reflecting both the joy and pain of her life, and she set the tone for many weddings and church events throughout her life. She was also a talented singer, pianist, and organist. Alison married Craig Allred Decker, on December 22, 1967, in the Salt Lake City Temple. She was a devout member of The Church of Jesus Christ of Latter-day Saints.

Funeral services will be held at the Mesa Arizona Kimball East Stake Center 4640 E. Holmes at 11 a.m. on Saturday, December 8, 2012. Flowers and on line condolences may be directed to Bunker Family Mortuary, 33 N. Centennial Way, Mesa, AZ 85201 and bunkerfuneral.com. Viewings will be held from six to eight on Friday evening at the Mortuary and at ten Saturday morning at the Stake Center. Interment will take place on December 12 at noon in the Ogden City Cemetery in Ogden, Utah, where her father is buried.