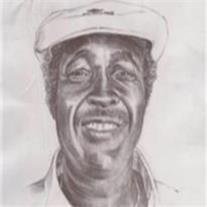 Alfred (Ray) Freeman, 75, passed away August 25, 2011 in Peoria, AZ. He was born May 22, 1936 in Mesa, AZ to James and Jewel Freeman. He worked for the City of Mesa as a foreman in the Utility Construction Department, retiring in 1989. He made the best BBQ brisket. He was loved and will be missed by everyone who knew him. He was preceded in death by his parents, siblings James Freeman, Jr., JD Freeman, Beatrice Stephens, Louetta Freeman, Velma Freeman, Gereldine Freeman and his son Derick James Freeman. Cherishing his memory are his wife Renae Freeman, daughters Tonya and Tiffini Freeman, sons Kenny Freeman, Kendrick Russell, brother Robert Freeman and a host of nieces and nephews. Funeral services are Friday, September 2, 2011 at 11 AM, preceded by a visitation at 10 AM at the Mt. Calvary Baptist Church, 1720 East Broadway Road in Mesa.